The Bells of St Mary's

The present church was built in 1878 and the present tower, replacing an older one, was added in 1885. Before 1885 there were only three bells in the old church. In 1625 William Gilpin, of Windyhowe, left £50 towards the casting of these three bells and the Tenor (the largest bell) was inscribed thus:- 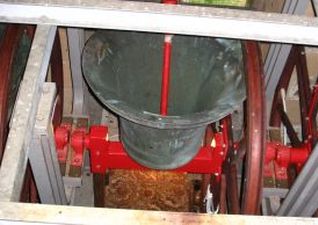 What happened to these three bells is something of a mystery as by 1881 Crosthwaite had three quite different bells, two dated respectively 1695 and 1861 and the third undated. The 1861 bell is a re-cast of another 1695 bell and it is known that the 1695 bells were cast by Christopher Hodson as the surviving bell of that date bore an inscription saying that it had been made by him in 1695. Christopher Hodson was famous for casting "Great Tom" of Oxford in 1680 and a ring of eight bells for Durham Cathedral in 1693.

Hitherto it has been thought that the three replacement bells came from Kendal Parish Church in 1773, but it is fair to say that there is now some doubt about this as there is no evidence of this in the records of either church nor any accounts showing the cost of transportation and hanging. It may well be instead that the Hodson bells were re-casts of the Gilpin bells and this could account for the fact that there is no information about what happened to them. Hodson is believed to have taken a lease of the Kendal bell-house for casting bells and, if that is so, then the new bells would have come from Kendal and thus given rise to a misunderstanding that they came from Kendal church.

In 1885 Frank Atkinson Argles, who had contributed generously to the rebuilding of St. Mary's, bore the cost of having a ring of six bells installed. These six bells were cast by John Warner & Sons of London and probably incorporated the metal of the old bells. These are the same six bells that we hear today, the only difference being that they were re-hung in 1982 on roller bearings which makes them easier to ring. The smallest bell, the Treble, weighs 4½ cwt and the largest, the Tenor weighs just under 10 cwt. Each bell is inscribed with one verse of Psalm 150 (in Latin) together with the name of John Warner & Sons as the firm that cast them. 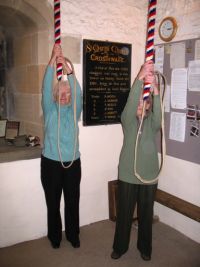 After a period of several years when there was no regular band of bell ringers at St. Mary's, a new band was formed in 1998 with a view to ringing in the Millennium. This initial objective was achieved and the band continues to ring regularly for Services. Currently there are 5 members and at practices they are usually joined by several ringers from other towers. Practices are held weekly on Fridays from 10.00 am to 12.00 noon.

Sunday service bellringing starts at 10.20am, except for Evensong, usually on the first Sunday of the month, when it starts at 5.50pm.

If you are interested in becoming a bell ringer or would merely like to see what happens please contact Christine Knighton (015395 68373) or come to the tower at one of the practice times or when we are ringing before Service.