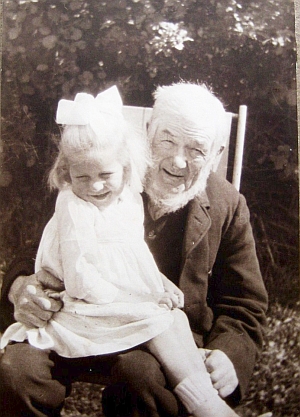 Mr George Brockbank of Pool Bank, Crosthwaite one of the districts "grand old men" died at his home on Friday aged 91 years. He was in possession of all his faculties up to the last and was going for a walk after tea on Friday when he was taken ill and died almost immediately. He was very active for his years and insisted on taking a walk every day if the weather permitted. Born at Levens in February, 1839, Mr Brockbank was the son of the late Mr William Brockbank, the village blacksmith, and after leaving Levens school he was engaged as a blacksmith and farmer. Upon his father's death he took over the business and worked at Levens until 1906 when he became the tenant of Pool Bank, Crosthwaite and farmed there with two of his sons. Despite the fact that he had reached an age when most men relinquish work, Mr Brockbank did odd jobs on the farm up to a few years ago and at the age of 86 years he was able to load carts during haytime. A keen hunter, he spent most of his spare time following the foxhounds and within a few days of his 75th birthday, hunted on foot every morning until evening. Then after a hearty meal at home he went to Crosthwaite village to attend a political meeting and accomplished a days walking which would have daunted many a younger man.

As a boy, Mr Brockbank would follow the foxhounds all day and return home in the evening to receive a severe scolding and no tea. Nothing daunted, however he would visit the boiler in which potatoes were being boiled for pig food and make a hearty meal. He always enjoyed the boiled potatoes and having to satisfy his appetite with them did not deter him from repeating the escapade the next time the hounds visited Levens. When asked how he had built up such a fine constitution, Mr Brockbank invariable replied that "hard work - and plenty of it never killed anyone". Before he left Levens Mr Brockbank was a churchwarden for some years.

Owing to the fact that he had a wonderful memory he was an interesting conversationalist and his reminiscences were always entertaining. One of his favourite topics was the famous "Radish Feast" at Levens Hall and the toast "Luck to Levens as long as the Kent flows" drunk in Morocco. In those days the road from Levens Bridge to Witherslack, across reclaimed moss land was in such poor condition that heavy horse-drawn circus vans had to traverse it non-stop. Vans that came to a standstill became bogged axle-deep. Before railways came into being and the Arnside viaduct was built, coaches from the south for Grange and Barrow all travelled by Levens Bridge and when he was a youth Mr Brockbank had a black donkey with which he used to race the stage coach along the road between Levens Bridge and Witherslack. The same donkey was used for carting coals from the canal depot at Crooklands, when the canal was the only means of transport. He remembered harvesting corn in Tristrams (now the Heversham Grammer School playing field) and was paid three halfpence per hattock for the work. Each sheaf had to be a yard round. One of his most amusing stories was in connection with the cutting of peats on Levens. A number of men were engaged and they worked twelve hours a day. The signal for work to commence was the ringing of Levens bell at 6 a.m. and the workmen would sit on their barrows until the bell rang. The same spirit characterised "finishing time" and when the bell rang at 6 p.m. tools and barrows were dropped immediately and left in that position until the following morning. During a big flood in the winter of 1852 a cottage at Stakes Moss, Foulshaw, was flooded and Mr Brockbank assisted the old woman who lived there, carried her pig upstairs to safety. The old woman spent the night on a beam. Another anecdote was in connection with the Christmas decorations at Levens Church, the lads of the village being sent by the Vicar to collect mistletoe. 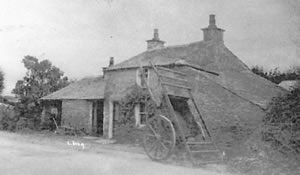 His parting words to the boys as they departed on their mission were "Get it honestly if you can" but on almost every occasion Mr Brockbank took part in the expedition, the mistletoe was taken from a neighbouring orchard after darkness had fallen. As a boy, he knitted comforters for the troops engaged in the Crimean War.

Mr Brockbank married a Miss Hodgson of Warton in 1872 and she died in 1906. (December 28th) He is survived by four sons and two daughters, and there are ten grandchildren.

The funeral took place at Heversham Church on Tuesday, the service being conducted by the Rev. E.R.. Ellis, vicar. There was a large number of mourners, among whom were: Miss Alice Brockbank (daughter) Messrs W.T. and J Brockbanks (sons), Mrs W. Brockbank (daughter-in-law) and the Misses P. and A. Brockbank (grand-daughters).