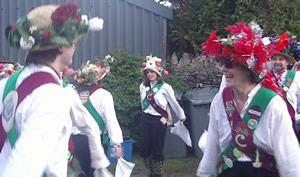 On the traditional Twelfth Night (17th Jan in the old calendar) Crook Morris of Kendal re-established what was once a common sight in many parts of the countryside at the end of the old year: the heralding-in of the New Year, namely Wassailing - derived from the Old English words meaning 'good health'. It is the practice of singing and dancing, often in an orchard, to celebrate Twelfth Night. The custom involved visiting a chosen apple tree (or in our case a damson tree) in an attempt to frighten away evil spirits, or to waken the good spirits of the orchard. Wheat fields and cattle were also 'wassailed'. 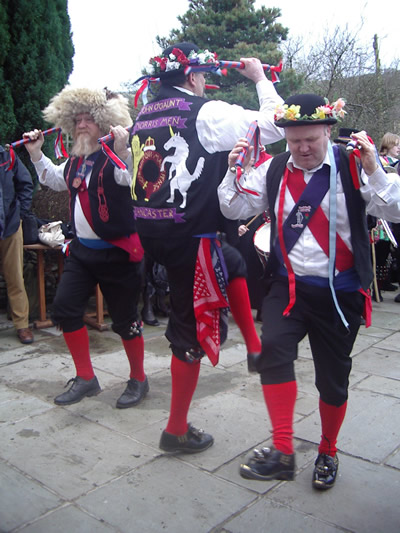 The ceremony took place in the orchard of damson growers Mr & Mrs John Walker of The Row in the Lyth Valley. Master of Ceremonies, Simon Gillow, let the proceedings with great gusto. After singing the Cornish Wassail to our kind hosts everyone processed to the orchard and walked round the tree banging drums, blowing whistles and generally making as much noise as possible to frighten away those evil spirits. After saying the poem 'The Wren' and singing 'The King' Simon addressed the tree and hung a miniature wren in an ornate cage in its branches. Mark Jackson poured liquid on its roots and the wassailing cup, which was specially made for Crook by potter Sheila Mason, was passed round. Pieces of toast were dunked in the liquid and hung on the tree by everyone after they had taken their sip. Delicious Wassailing cake provided by Judy Malkin was offered and Crook Morris then performed dances with guests John O'Gaunt Morris from Lancaster. 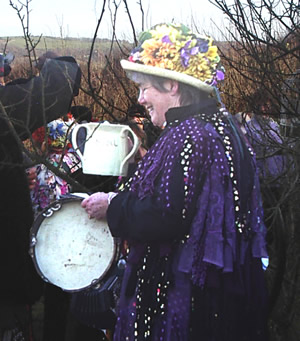 Somerset Wassail was sing as we departed from our hosts and celebrations continued at the Hare & Hounds, Bowland Bridge with the performance of a 'Mummers' Play'. The Mummers' Play is a folk play that used to be popular throughout the whole of England in various forms. The word 'Mummer' possibly came from the Greek word 'Mommo', meaning a mask, the wearing of which became popular at royal functions in the 14th century, the practice of such being termed 'Momerie'. Traditionally, the performance itself begins with an introduction, usually by Father Christmas, who also clears space in the venue for the play to be performed. The play then moves on to a hero combat with two combatants, who differ from play to play, such as Saint (or King) George, a Turk, a soldier, a dragon and various ruffians. Much boasting of martial prowess by the combatants occurs before and after the fight. The person who is 'killed' is always brought back to life by a quack doctor who first boasts of his skill in medicine. The play ends with a plea for money from the audience and then usually a song or Mummers carol.

More dancing and the singing of Wassail songs followed, with a second performance of the play and a music session. The event, which was dedicated to Dave Hicks, a member of Crook Morris who recently passed away, was organised by Judy & Chris Malkin. Ann Marshall collected on the day and £80 was raised. Together with a donation by Crook Morris, we hope to give over £300 to Kirkby Stephen Mountain Rescue team, of which Dave Hicks was a member.

Crook Morris practise on Monday evenings from October to March at the Nether Hall in Kendal. If anyone is interested in joining us or would like more information contact Martyn Harvey on 01539 720551 or email .