Planning began as usual last autumn, with a review of what grew well and what not so well in 2009: were there any areas in the garden we should change for next year? Had we picked up any ideas for layout or planting? Apart from a couple of new, short paths through the rose beds, a bit of work on the pond and replacing a few lupins and delphiniums (tend to be short-lived), no substantial changes were planned.

The garden at Orchard House has been developed from scratch over the last 9 years, with the aim of creating a country garden with different areas to reflect different interests, from formal box hedging, a few specimens of topiary and a small rose area to informal cottage garden planting. The south-east facing garden takes the eye from the garden into the landscape beyond.

So, last autumn quite a number of perennials were split with a view to having a plant stall for the Open Gardens weekend. The cottage garden border was cleaned and tidied, rooted cuttings potted on ready for the cold frame, and sweet peas sown and overwintered in the greenhouse. During the winter the veg patch was cleared and dug over, and in late winter we had a delivery of well rotted manure.

Despite the floods of November and the long and extremely cold winter, there was a lot less wet and windy weather than normal to challenge our very exposed garden. We lost just one ceanothus, several penstemons and, as usual, all the pelargoniums in the cool (or in this case frozen - sometimes as low as -10) greenhouse!

In February, shrubs were pruned and weeding and clearing continued as the weather permitted. It was good to see signs of spring, with snowdrops and hellebores, and the daphne bholua with its sweet scent. Seed potatoes were started in egg boxes.

Broad beans, dwarf French beans and peas were sown in peat pots, and Swiss chard and beetroot in guttering - and all were given a good start in the greenhouse. Lettuces were sown in troughs - a tip from Peter McDonald - they are kept in the greenhouse and later outside on a bench, and this way the slugs find it harder to get to them. It really does work.

April brought some warmth to the garden and preparation of the garden took on a new urgency, with hoeing, feeding, slug pellets (sorry!) and weeding. Convolvulus, vetch, herb Robert, some sort of spurge and "sticky Willy"(?) are our worst invaders. By the middle of the month lots of colour had appeared - aubretia, hyacinths, daffodils, tulips, auriculas then rhododendron and azaleas providing interest over the next month or so, A trip to the Harrogate Spring flower show provided lots of inspiration and a few opportunities to fill those gaps!

Meanwhile, the grass was treated and fed, the paths were made and the pond was repaired - a time-consuming job. By the end of April the sweet peas were growing well. The biggest job was watering - the ground was just like dust after such a prolonged spell of dry weather.

May continued to be unseasonal, with frosty nights and cold days - trying to cover the emerging wisteria blossoms with fleece was ridiculous, but that's the sort of daft thing which happens when the garden is to be on view! At one point it seemed there would be no colour in the garden at all for the Garden Ramble.

Then all of a sudden we had an extremely hot weekend, and everything took off. Our first sweet peas were picked on May 21st and for the next week it was all stations go, tidying, weeding, filling gaps - and still watering. The exochorda was dazzling white, the broom a mass of fragrant yellow, and the pale mauve wisteria blossoms were a foot long and their scent filling the garden. Gradually, the plants emerged in all their beauty - violas, iris sibirica, geraniums, aquilegias… just in time for the 450 visitors to the garden… so we breathed a sigh of relief… enjoyed chatting to the visitors… enjoyed seeing the results of hard work in the other gardens… then after a few days' relaxation… it was time to start again… weeding, dead heading, watering, but still enjoying the fresh air, the colours, the perfumes,… that's what makes it all worthwhile… not to mention the taste of freshly picked produce from the small vegetable plot. 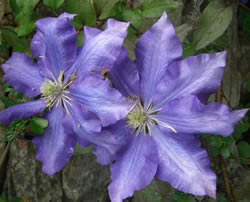 Click here for photographs by Martin and Dorothy Grace

Click here for Penny Mutch's description of the event