When Africa Came to the Lyth Valley 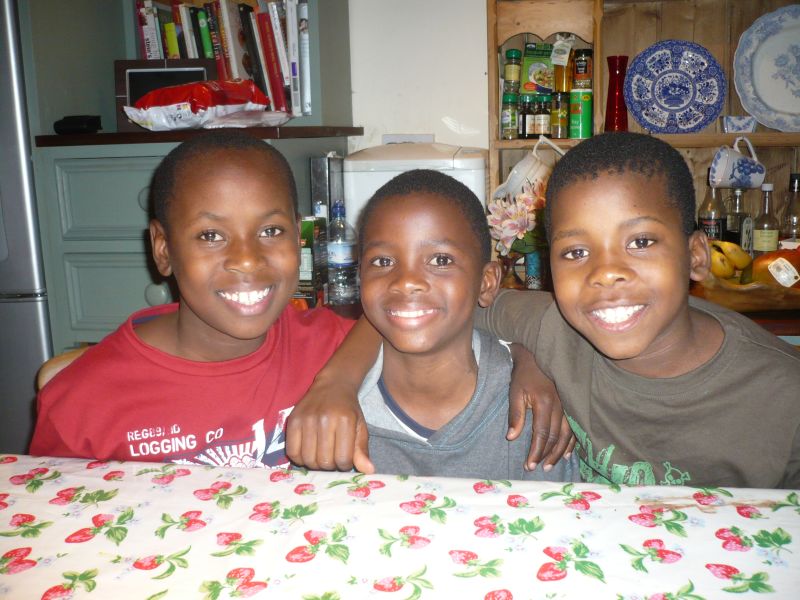 We were a small group of anxious people, huddled against radiators in Crosthwaite Village Hall, one bleak November evening. The rain was lashing down outside. John had been along earlier to make sure the heating was on and the chairs were out. A muffled phone call seemed to indicate traffic jams on the M6 and delays. Half an hour later, a huge coach drew up outside and 22 little children spilled off into the side room of the Hall. The African Children's Choir had landed in Crosthwaite.

Our introductory talk from Angee, the American tour leader, gave us all the pointers which would help to make their visit run smoothly. The children filed, quietly into the main Hall and I was reminded of my mother's tales of her wartime evacuees. Each host family was introduced to their children and the adult who would be staying with us to look after them. We collected cases and hurried out into the bleak winter's night.

The African Children's Choir was the brainchild of a Human Rights Worker, Ray Barnett, who was shaken by a Uganda in ruins, where orphaned children scavenged for food and water in the bush and on the city streets. Whilst in Uganda he gave a small boy a lift in his car. This little one sang for the entire journey. 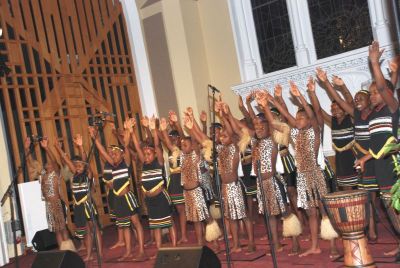 It gave Ray the idea for awakening the people in Canada, his native country, to the problems of the African continent. He would take a group of these beautiful children, to be his ambassadors. So Music for Life and the African Children's Choir were born in 1984. The first choir to visit Vancouver raised enough money to fund the Makerere Children's Home in Uganda. The children touched the hearts of those audiences, just as they would do at St Thomas' Church in Kendal on the night of 10th November.

But back to Sunday night and the rain! We drove through the dark lanes, arriving at our home to bright lights and a roaring fire. As it was late, our three boys took their bags to their bedroom, getting ready for bed before we settled down in the kitchen to a roast chicken dinner. After saying grace, the boys and Uncle Muzi, who was the adult looking after them, tucked into their food with gusto!

The children were calm, polite and controlled, speaking only when spoken to. They wore the most beautiful beaming smiles, seemingly quite relaxed in their new, temporary home. 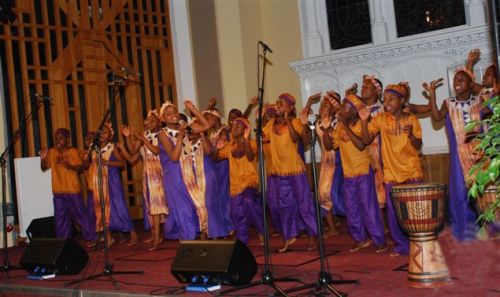 At the end of the meal, they thanked us (Uncle and Aunty) for their food, asked to be excused and took their plates and glasses to the sink, placed their chairs under the table and calmly walked into the living room, where they fell upon the toy box. Ludo was selected, the pieces placed on the board. Uncle Muzi joined them and battle was joined! As they knocked off "men" the boys hooted with laughter and rolled around the floor, with glee. As soon as Uncle Muzi announced bedtime, the boys came to wrap their arms around us in a goodnight hug. What a marvellous feeling that was. They fell straight to sleep after their gruelling journey up the jammed M6.

At seven in the morning precisely, we heard the patter of tiny feet as the boys tumbled into the bathroom. Following a bacon and egg breakfast (protein laden), we drove our new family to the Village Hall, where they were to begin their lessons with an act of worship, just as the children at Crosthwaite Church of England School were doing across the road. At midday their coach driver, Paul, took them to St Thomas' Church in Kendal.

During the afternoon they had rehearsals and a sleep on the floor. Tea was ready for them at 5, provided by Steven Doherty and Valerie Harrison. A team of helpers was there to serve and wash up. The tasty tea disappeared off plates. Meanwhile, the technicians travelling with the Choir were trailing wires through the Church and setting up large television screens. The children disappeared to put their costumes on. 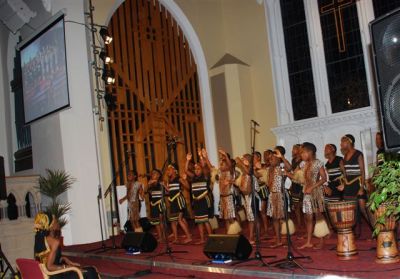 The auditorium filled up with the 450 strong audience. Excitement fizzed in the air, as we waited for the Choir to appear. The children from Crosthwaite School were cross legged at the front, looking up at the stage, where two drums awaited their players. Mary, the Choir conductor, dressed in the vibrant headdress and long draped dress, in gold and black walked, straight backed down the aisle followed by little girls in black and yellow dresses, bright headbands circling their heads, boys in leopard skin tunics, one arm and one leg girdled by shaggy straw bands.

We were then treated to the most invigorating, lively song and dance performance many of us had ever seen. Beaming smiles shone out from the stage as the children brought African music, drumming, dancing and gospel songs to Cumbria.

Godfrey, a former Choir member from Uganda told tales of his tour to Seattle aged eight. He knew three words of English, "yes", "no" and "thank you". When his hosts offered their charges a bowl of the mystery food called ice-cream, he said "No". His friend said "Yes", and tucked into the delicious bowl of icy sweetness. Godfrey realised immediately that the next words he would need would be "I'll try"! 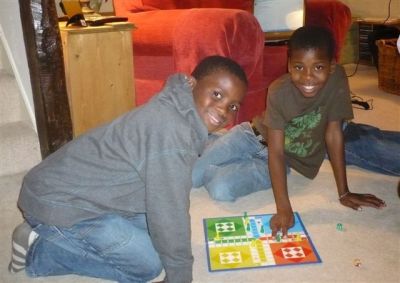 The children returned to the stage, dressed in orange and iridescent blue costumes. We could not wait for the rest of the concert. We were not disappointed. The children had the most extraordinary capacity to infect their performance with excitement and verve. We did not want it to end. We listened to a film of how our money would help to provide education and health care for these children back in their South African home, close to the Mozambique border. The children told us one by one what their hopes and aspirations for the future were. People gave money in gift aid envelopes, knowing that this charity would provide these children with the possibility of realising those dreams.

The days that followed allowed the host families and their charges to get to know each other and to appreciate what a privilege it was to look after these children. Talking to each other after the choir had left, we all realised that we shared the same feelings of amazing awe and wonder at both the poise and zest for life that these wonderful children had. Several people expressed doubts that I would be able to set down on paper the essence of the visit and I agreed with them - but here are a few of their tales.

Whilst appreciating the self control and inner calm of these little ones, their politeness and ability to share and take turns, what each family loved most about their charges was the fun, laughter and vitality that they brought into our lives, despite the pain and loss of their early lives. 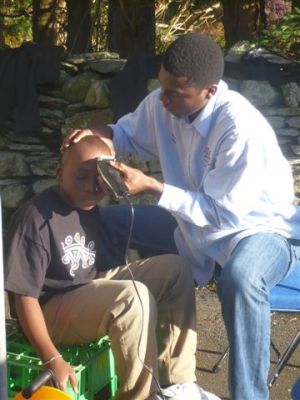 Valerie and John looked after Paul, the coach driver, a long way from his home and family in Bath. He had become a caring Uncle to the children, quietly searching the coach each day, recovering plastic bags containing wet socks and old banana skins and remnants of packed lunches in an otherwise tidy and ordered environment.

Dorothy organised a game for her girls, played last in her house when her children were little. Each team was sent off with half a Christmas card and had to find the other half around the house. Squeals of delight, followed by a tumbling of bodies back to base are what she will remember. Jill and Denis bought a CD of the Choir and showed their girls how to play it. They at once broke into the whole song and dance routine, with an energy that amazed their hosts. Jill, thinking they would be tired of performing, replaced the CD with another unrelated choice, but no, the girls showed that the music was a vital part of their lives. They put their own CD back into the player and continued with their joyous singing and dancing. 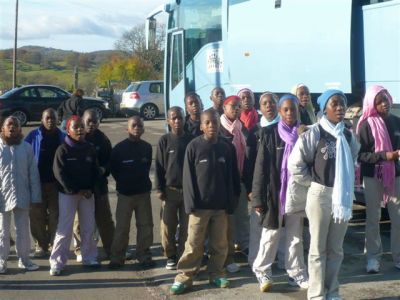 Victoria watched, with quiet delight, as her three boys curled up around her husband, Oliver, a man who had never had children of his own, as he read bedtime stories to them. One of Geraldine's little girls asked her, politely, how old she was. "Well, I'm just sixty!" she answered. She had to suppress a giggle as the reply came back, "Well you don't look a day over sixty!" Wendy and David looked after three girls, too. They were sitting around the dining table, after their meal, in a room which had seen so many happy family celebrations and meals together. Wendy asked the girls what their favourite song was. The immediate response was "I Will Lift up Mine Eyes to the Hills", at which point they sprung to their feet and raised their voices in three part harmony. The two of them felt the hairs on the back of their necks rise, as they listened to the purity of these beautiful, young voices.

It was the last morning of the visit. Our boys jostled around the hob in our kitchen, making us a promised breakfast of "African eggs", which turned out to be a very tasty kind of omelette. Hugs of farewell followed at the Village Hall. These now felt like expressions of mutual love and affection. A few of us returned, later, to wave the children and their carers off. Uncle Muzi was working in the first sunshine of the week, in his make-shift barber's shop.

The children had been to say their last goodbyes to their friends at Crosthwaite School and had given last hugs to their host Aunties and Uncles. They stood in a loose group at the bottom of the coach steps and sang "The Lord Bless You and Keep You". There was not a dry eye in the house! We waved, they waved, as the coach pulled away, heading for a concert that night, in Carlisle. We were left with such mixed feelings, a little lost, but also thankful for the joy and fun we had experienced, looking after these wonderful children.