Built in 1504 as a 'Chapel of Ease' during the reign of Henry VII, St Anthony's Church Cartmel Fell is described as one of Cumbria's finest 'Lakeland gems'.

Situated along the picturesque Winster valley, which runs three miles east of Lake Windermere, the late medieval Church of Cartmel Fell is a hidden treasure of beauty and history, lying under the gaze of Raven's Barrow. It lies nestled amongst deciduous woodland, grazing pastures and limestone outcrops, accessed only by the tiniest of country lanes. In springtime the display of snowdrops, Wordsworth daffodils and bluebells in the churchyard are magnificent. In the evenings roe deer may venture to graze among its tombstones, or a dog fox may be heard barking in the distance. It captures totally the essence and atmosphere of the English country church at its best, and its serenity is unbeatable.

The church building itself is made from original medieval timbers, filled with limestone and plaster and therefore a Grade 1 Listed Building. The church has a small bell tower with a rectangular knave and chancel. Its windows are in the classical Tudor style with flat-headed arches and diamond lead quarries. Not only is the building itself beautiful and historically significant, but also contains several items of priceless historical value. Due to its hidden location and 500 years of devoted local worshipers down the generations, Cartmel Fell boasts some of the rarest church artefacts to survive the English Reformation.

The original pre-reformation Rood Screen and canopy still exist being turned carefully into what's known locally as the 'Cowmire pew', historically belonging to the Briggs family who were early beneficiaries of the church. On it, traces of paint still remain and the faint images of saints can be seen on the rear panels. The original 2'6" oak carved figure of Christ hung above the Rood was kept, and now is on display in Kendal Museum being only one of three in the country to date from that period1. 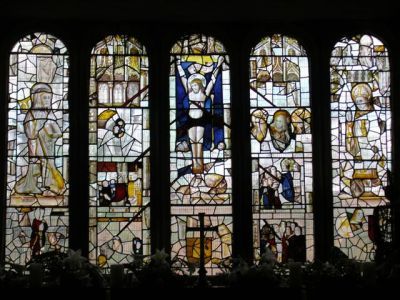 The stained glass above the altar at the east end of the church is a magnificent example of late Medieval art, surviving both the Reformation and the Civil War and may possibly predate the church itself. The window depicts scenes of St Anthony, the Crucifixion, the Seven Sacraments and St Leonard with artwork typical of the early fifteen century during reign of Henry V.2 Some historians believe the Augustinian Canons of Cartmel Priory may have transported the glass to St Anthony's during its dissolution in 15363.

Over the generations, there have been a few additions to the church. One being the rare triple-decker pulpit built in 1698 with a new window inserted to give the preacher extra light. The interior woodwork carvings are still crisp denoting guild emblems of the local wool trade4.

Cartmel Fell is very much part of the local community being used for public worship every Sunday and for occasional Baptisms, Weddings and Funerals as well as concerts. However the local community is small, consisting of a population of a few hundred, with scattered rural housing and farms and alone has difficulty raising large funds.

Each year Cartmel Fell Church has many visitors, seeking out the church for many reasons, historical as well as spiritual. It is a holy place that serves the needs of passers by and pilgrims, who search for such oases of tranquillity in our chaotic world. Many come back time and time again to what has been described as 'a place of beauty and peace, one of the most magical little places in the whole of Cumbria' and because of this the church is open each day. Local schools in the area are also being encouraged to visit the Church because of its educational value.